To connect the highway with the silos and mill of seeds propagation centers besides the feeds factory located Talking Blat. 3- Constructing cofferdams to block the canal water from the work site.

5- Reinforcing damaged columns in the concrete base with steel in addition to the installation of reinforcing columns and coverage and casting through two stages.

6- After casting the columns have completed, the installation of the coverage and reinforcing the crown of the columns starts in parallel with the work of casting pre-casted concrete beams instead of the damaged ones.

9- Putting the expansion joints between the beams and casting concrete of / 15 / cm thickness above all beams.

Project Constraints: Rainy weather conditions which require the pumping of accumulated rainwater from the work site, which may delay implementing the project by the contractual period. 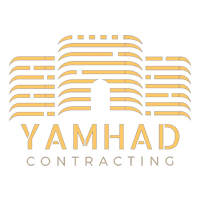